The establishment of the Visegrad Group was a response to the new challenges that Poland, Czechoslovakia, and Hungary faced after another European spring of nations. 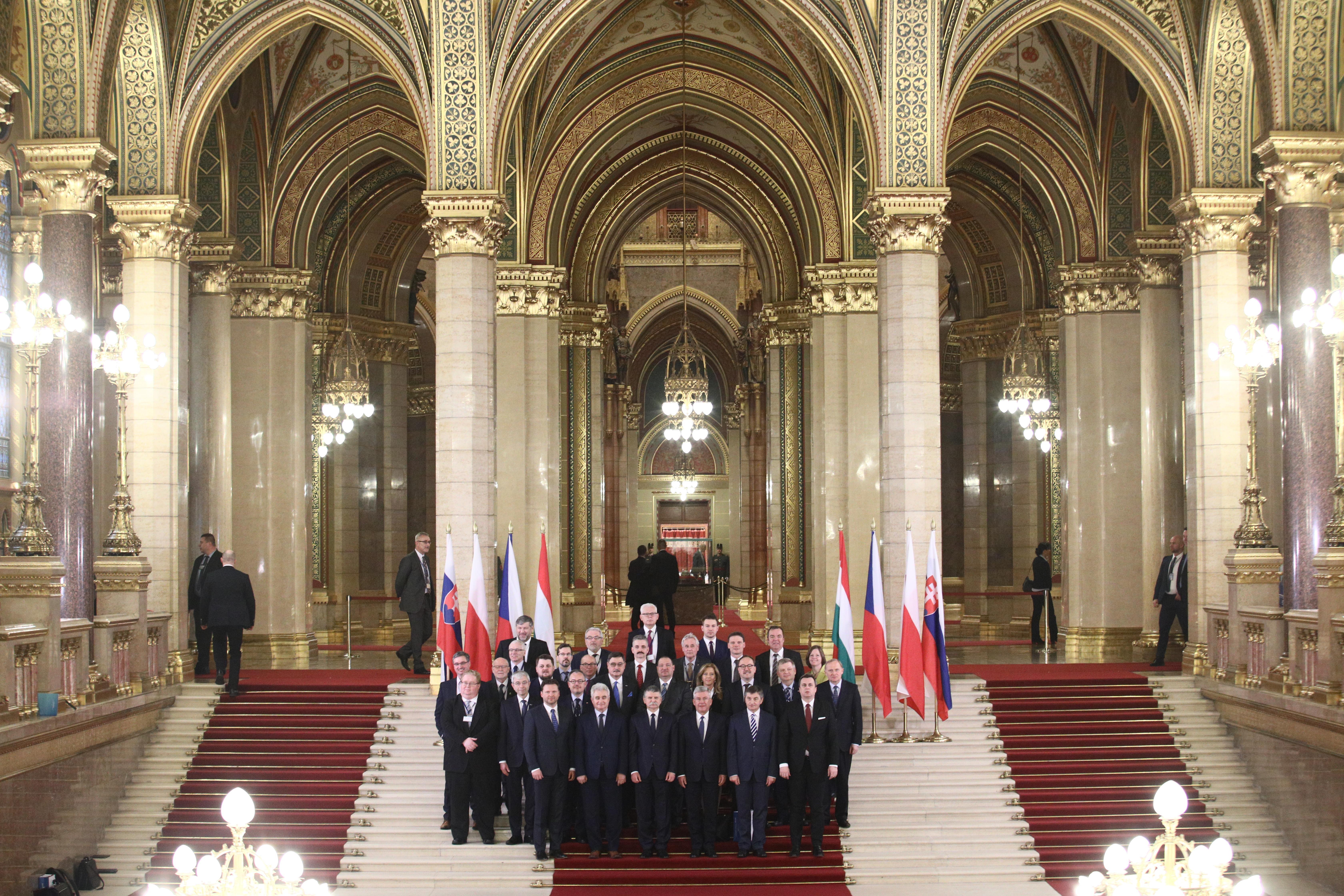 Hungary, Budapest, March 2, 2018. The Conference of Presidents of Parliaments of the V4 Countries. © Leszek Szymański (PAP)

In their founding declaration of February 15, 1991 (the Soviet Union dissolved on December 26 the previous year), the V4 “founding fathers” pointed to “the full restoration of the independence of states, democracy, and freedom” and “commitment to the creation of a European political and economic system”. They drafted their program when Soviet troops were stationed in the territories aspiring to independence, the economies of the V4 countries depended on the Kremlin in terms of raw materials, and their economic systems, associated with the collapsing Soviet economy, entered subsequent phases of disintegration and collapse.

For the first time since the Yalta Conference, this new situation required from the V4 countries’ leaders, nominated in democratic elections, a permanent redefinition of relations with the Soviet Union, and then with Russia, its legal successor. The Soviet, and then the Russian factor, were present in the politics of V4 countries.

European historians remind us today that their first common political and military success was moving the Soviet army units away to the Soviet Union. It was a very important moment in this history. However, the Soviet Union (and, subsequently, Russia) have remained a permanent reference point for many policies of the V4.

Russia has not intended to give up its political and economic influence in Central Europe and in the so-called post-Soviet area. From the perspective of 27 years (from the dissolution of the Soviet Union to the present day), we can make a hypothesis on the political conflict between the V4 countries and the Soviet Union (and its successor, Russia).

Russia’s policy towards Prague, Warsaw, Budapest and later towards Bratislava, was first focused on having economic, political and secret service base in the former satellite countries, as illustrated by some links of Russia’s policies towards the new states taking advantage of the historical occurrences and susceptibility and including pro-Soviet leanings of certain circles. Both the new V4 authorities and the general public rejected these policies.
Another contention point between Russia and V4 countries was a strategic issue, of key importance to security and future: the accession of Central and Eastern European countries to NATO and to the EU This was, and remains, a fundamental dispute concerning the nature and meaning of politics, the understanding of European values and, in particular, the analysis of the message of Europe’s 20th century tragic history. Russia was and remains against this choice.

They considered the NATO enlargement a historical mistake; a decision directed against their interests. They also negatively assessed the European political and economic model. Russians subordinated their revisionist policy towards Europe and the North Atlantic Community to this very thesis. One of the strategic aims of Russia is to stop the evolution of NATO and to disintegrate the European Union. Russia is permanently seeking to revise the construction order in Europe after the victory of Solidarity, the fall of the Berlin Wall and the Velvet Revolution. The authorities are trying to believe they can turn back time and find alliances.

V4 countries against the annexation of Crimea and Russian aggression

The annexation of the Crimea and the organization of a separatist rebellion in eastern Ukraine is another example of the continuation of Russia’s revisionist policy. This sequence of events should also include the history of the conflict over Transnistria and the war with Georgia in 2008. In this context, we can see a combination of two strategic lines of Russian policy: control (political, military and economic) over the post-Soviet area and a stop to the expansion of the European Union and NATO. Sociologically, these conflicts are also one of the sequences of the disintegration of the Soviet empire: not only is this historical process still ongoing, but it is not even coming to an end. It is the background, or more precisely, the counterpoint and inspiration for the Kremlin’s revisionist policy.

V4 countries rarely adopted a common position on Russian policy, especially in crisis situations. The divisions within the Group became obvious during the war between Russia and Georgia in August 2008, when the Presidents of Slovakia and the Czech Republic, Ivan Gašparovič and Václav Klaus, and Slovak Prime Minister Robert Fico accused Georgia of being responsible for the armed conflict. Poland, however, supported Georgia. Polish President Lech Kaczyński organized a pro-Georgian alliance with the participation of Lithuania, Latvia, Estonia, and Ukraine. He did not though get the support of the President of Hungary for his initiative. László Sólyom, the then president of this country, has been neutral towards the Russian-Georgian conflict. 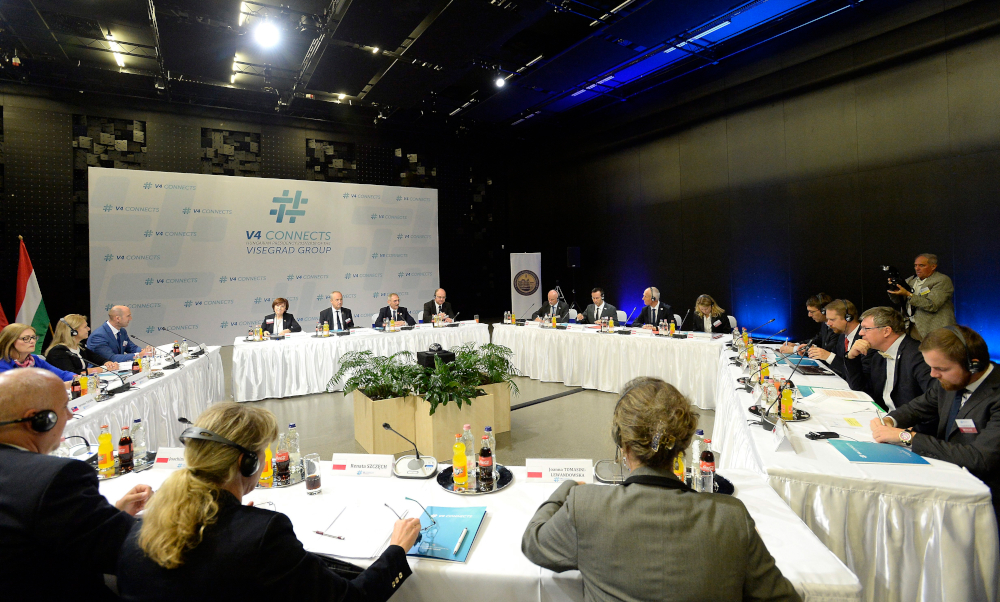 In the Georgian capital, President Kaczyński took part in a rally and delivered a sharp, anti-Russian speech: “We are here to take up the fight. For the first time in years, our eastern neighbors show their true face we have known for hundreds of years. They think other nations should be subordinated to them. We say no! That country is Russia,”, Kaczyński said. The Visegrad Group countries did not support the Polish President. His initiative was also criticized by the “old Europe”.

The German newspaper Frankfurter Allgemeine Zeitung recalled that France, at the time the holder of the EU presidency, considered the five leaders’ trip to Tbilisi to be “an unhelpful expression of bias”. The newspaper claimed the expedition was arranged so quickly that there was no time to fully agree on common positions, and that Lech Kaczyński took little effort to agree on a trip with the EU, whose then President, French President Nicolas Sarkozy, was at the same time mediating in Moscow.

When Russia cut off gas supplies to Ukraine in 2009, the Slovak Prime Minister accused Ukraine of being responsible for disrupting gas supplies to the Slovak Republic, whereas Poland condemned Russia for using “gas weapons” against Ukraine. The different positions of the Czech Republic and Hungary on the 2009 gas crisis, which their governments described as “pragmatic”, did not hinder the start of cooperation on European integration of gas markets and their diversification.

In the political discourse within the Visegrad Group (V4) some argue repeatedly that the different nature of perception of security threats and national interests, including fundamental differences in the assessment of Russian politics, may undermine trust between V4 countries and consequently weaken their cooperation.

When Euromaidan in Kiev was radically exacerbated, V4 ministers convened on January 29, 2014, to advocate a peaceful solution to the Ukrainian crisis. They also expressed disappointment over Ukraine’s refusal from signing the Association Agreement with the European Union. In this phase of the crisis, the ministers supported the activities of the European Union mission in Kiev with the participation of Polish Foreign Minister Radosław Sikorski.

After the annexation of Crimea, V4 called on Russia to respect the Budapest Memorandum guaranteeing Ukraine’s territorial integrity and reached a consensus on the reverse flow of gas to Ukraine, the direct supply of which was blocked by Russia. Ukraine received gas through Slovak, Polish and Hungarian gas pipelines. The Visegrad countries also shared the responsibilities related to economic and humanitarian aid for Ukraine.

In December 2014, all V4 countries supported the Polish suggestion to establish the second V4 EU Battlegroup in 2019. However, they were not that unanimous supporting another proposition–regarding the increase in military spending to 2% of GDP. Czechs, Hungarians, and Slovaks believed this was a premature and unrealistic postulate.

The attitude of V4 partners to the Ukrainian crisis has gradually evolved. At EU level, V4 countries supported the sanctions imposed on Russia linked with the annexation of Crimea and the separatist rebellion in eastern Ukraine and supported internal reforms in Ukraine in various ways. In national political discourses, new threads have emerged, revealing fundamental differences in the assessment of the situation and proposed solutions. The dividing lines are formed on the assessment of Russia’s threat, the effectiveness of sanctions and their further application, and ways of pursuing national economic interests, especially in energy.

In the fourth year of the war between Russia and Ukraine, Hungary advocates for the lifting of economic and political sanctions against Russia and implements major energy projects with this country. The Hungarian government believes that sanctions have been, and still are, costly for the Hungarian economy and it will be difficult to rebuild the trade balance with Russia even after lifting them. Hungarian Prime Minister Viktor Orbán is blocking Ukraine’s dialogue with NATO, demanding from Kiev a greater freedom for the Hungarian ethnic minority in Zakarpattia. Ukraine, and not only Ukraine, perceives Orbán’s policy as another threat to its territorial integrity. 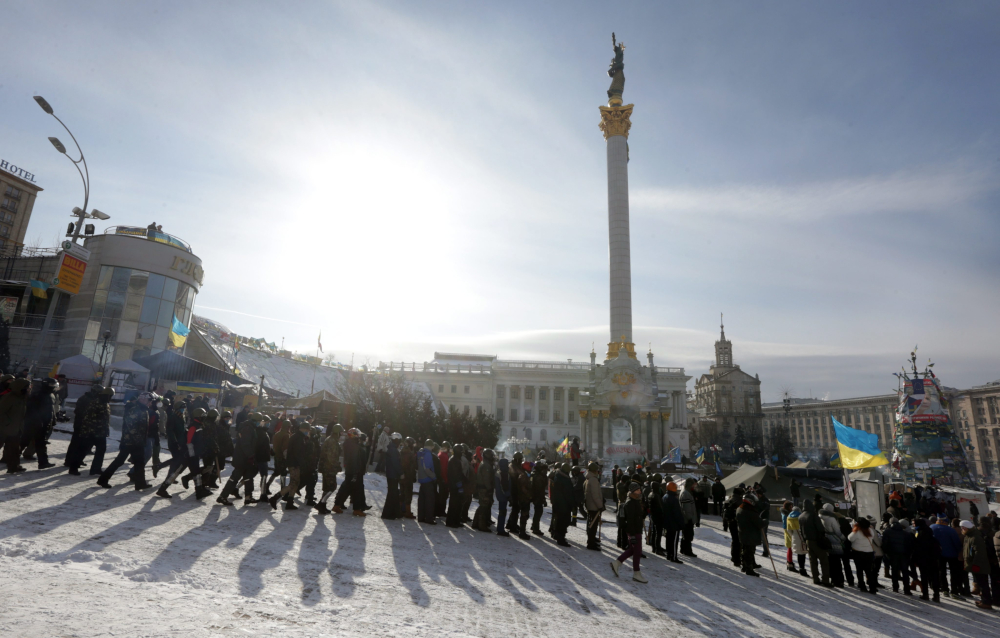 The Czech Republic and Slovakia believe today there is no longer a direct security threat caused by Russia and are also considering the advisability of maintaining sanctions against this country. Governments in Prague and Bratislava distance themselves from American decisions to rearm and strengthen the Ukrainian army, describing their attitude to the conflict as pragmatic, related to implementing economic interests of their countries and voters. President Milos Zeman, the most prominent representative of this pro-Russian political trend, proposed in his election campaign that Russia should pay Ukraine for Crimea.
Poland seems to be the most consistent in implementing the assumptions and objectives of its policy towards Russia adopted four years ago – after Russia’s annexation of Crimea and the aggression in eastern Ukraine. The Polish government is strongly in favor of extending the time and its anti-Russian sanctions and expresses its solidarity with the policy of the United States supporting Ukraine also in the military sphere. An important element of this policy is Warsaw’s opposition to the construction of the second line of the Northern Gas Pipeline (Nord Stream 2) and the creation of alternative gas supply networks to Central and Eastern Europe.

The Visegrad Group has reached no consensus on shaping a common policy towards Russia in one of the most complicated conflicts after the collapse of the Soviet empire. The initial agreement reached at the beginning of the Ukrainian crisis at the turn of 2013-2014 and immediately after the annexation of Crimea turned out to be very fragile. Some countries had their own separate economic policies with Russia. This confirmed that V4 could not aspire to take part in a geopolitical game: as one of its critics said, it “stood outside European politics”. Strategic objectives, such as diversification of energy transport routes, security, environmental and climate cooperation, and the delivery of transformation help to Ukraine, remained common priorities for the V4 countries. However, divergences regarding Russia, which is questioning the foundations of the European order and striving for their radical revision, may damage trust among the V4 countries, causing political erosion of the Visegrad Group.

V4: It’s good to be among friends

The Visegrad Group in the security architecture of Europe 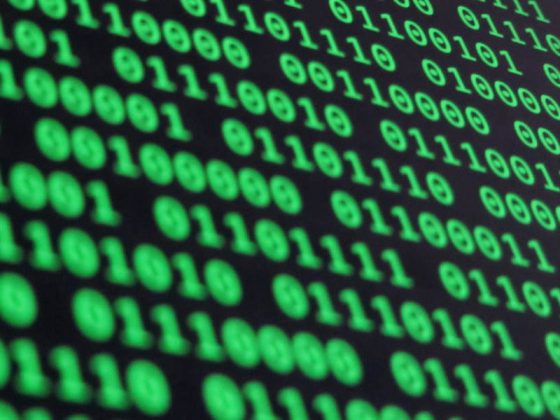 Expenditure on cybersecurity of the Visegrad Group countries

On Democracy in Europe

Is Iraq set to become the future regional superpower? 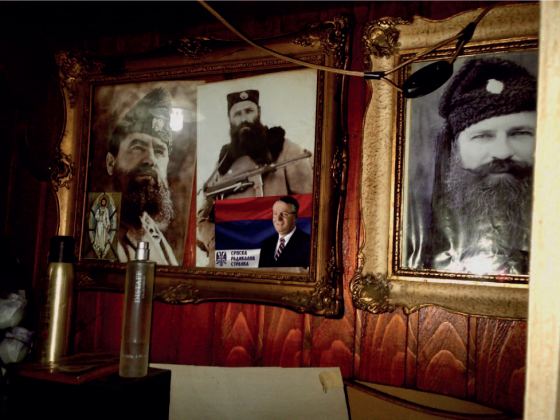