At the premises of the Embassy of the Islamic Republic of Afghanistan in Warsaw, on Thursday, 07.11.2019, The Warsaw Institute Review (WIR) held its ninth meeting in the signature initiative ‘Strategy Duologues on Geopolitics’, and the first with an Embassy of a country from the South Central Asian region.

As is commonly referred to in brief, the ‘Duologues’ are becoming an increasingly recognisable and unique characteristic of WIR. The initiative entails a series meetings with Embassies to exchange views from the perspectives of an Embassy and a geopolitical quarterly and think tank, as well as better understanding of the perspectives of both countries. 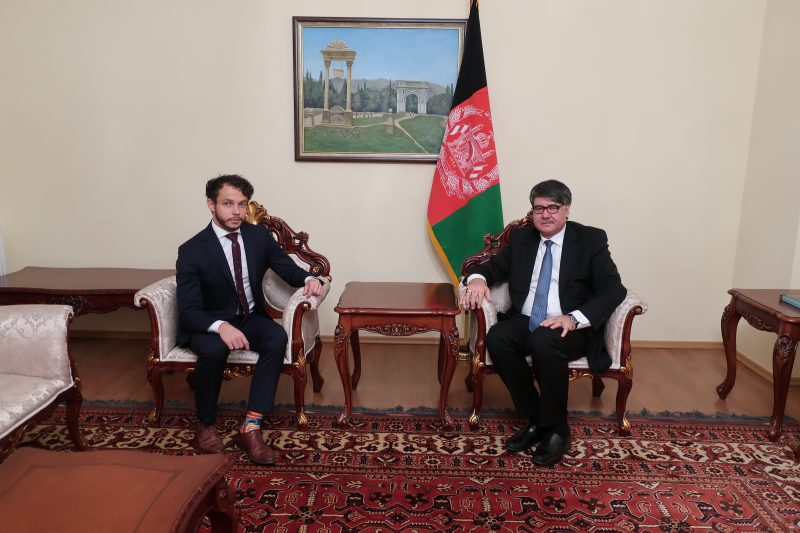 This Duologue was unique, however, in the sense that alongside traditional Duologue elements, it was also designated for an interview with H.E. the Ambassador, which will be featured as a vital part of the analysis in an article being currently written by the WIR Advisor on the subject of the Afghan Peace Process and the conflict in the country. The said article will be featured in the next Edition (nr. 11) of The Warsaw Institute Review, anticipated for early December 2019.

The Ambassador opened by saying that Afghanistan is grateful to Poland for help since 2002, and most especially for the sacrifices of the Polish troops, who are in most part situated in Ghazni Province. Poland currently maintains 300 troops as part of NATO Operation Resolute Support (RS) in Afghanistan. Presence of Polish troops operate also in Bagram Airbase, alongside the Afghan National Security Forces (ANSF) in a train and assist capacity, as the ANSF took on the leading role since NATO Operation RS formally took over from the International Security Assistance Force (ISAF) in January 2015. The ANSF are constituted of the Afghan National Army, the Afghan Air Force, the Afghan National Police, the Afghan Local Police, as well as the National Directorate of Security (NDS). 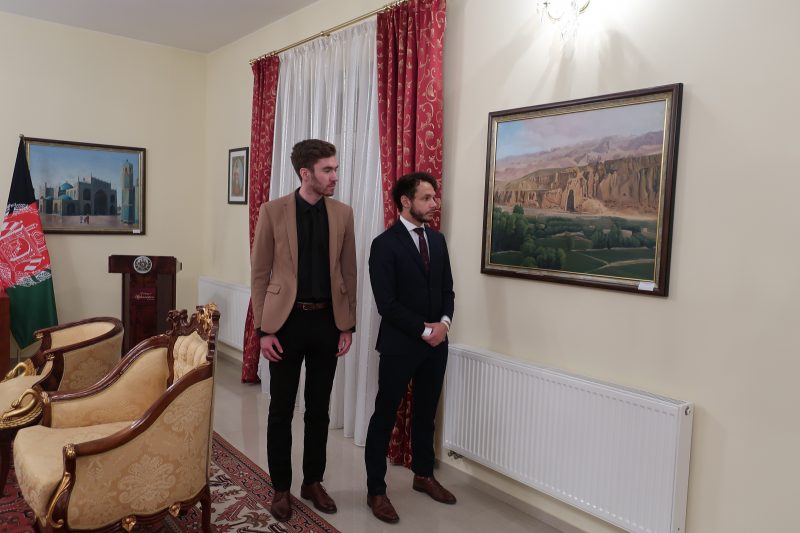 Yet cooperation between Poland and Afghanistan extends far, far beyond the military front. Diplomatic relations between Poland and Afghanistan were established in 1927, and have been developing throughout. In an important step forward, several bilateral agreements across several fields, including trade, political consultations, economic cooperation, cultural exchange, education development, frequent updates on parliament friendship committee activity and parliament to parliament communication. These were signed in 2012, and in came into force in December 2018. The agreements coming into force are designated for 15 years.

Poland’s development projects in Afghanistan include more than 60 projects in Ghazni province, which includes Poland holding capacity building programmes for junior officials in the Afghan government, facilitating functionality in public administration at the mid-level.

Furthermore, 35 students from Afghanistan are studying in Poland, where 50 % or more are in the University of Warsaw (UW), and another large portion are studying in Kraków. There, the Uniwersytet Jagielloński is going to shortly sign an MoU with Kabul University regarding cooperation, exchange of students and professors, as well as development in educational and scientific fields.

About half of those 35 students are self-financed, showing a change in societal factors enabling such a feat. In Estonia, there are 15 students from Afghanistan currently enrolled, which accompany the recent graduation of 7 PhD students in computer sciences in Tallinn University. The university maintains a master degree partnership with Kabul University which has already successfully completed two rounds, providing 10 scholarships for the computer science department in a Master’s degree.

In 2002, there were only about 1 million students in schools, whereas now in 2019, there are over 9.2 million, both male and female. Before, there were a total of 28 universities and higher education institutions, and today we can say that there are 34 government universities, and more than 125 private universities; every year producing 100,000s of graduates.

After all, Afghanistan is traditionally home to several renowned scholars, with some more famous ones from the 13th century, such as Jalal ad-Din Muhammad Rumi, whose 800th year commemoration was organized in 2007 by UNESCO.

With regard to cultural heritage, it is worth noting, Bamyan is the scene of a tragic loss. Carved directly into sandstone cliffs, there were two, massive Buddha statues. The smaller one, constructed in 507 AD, stood at 35 metres tall, and the larger, constructed in 554 AD, stood at a staggering 53 metres tall. To the dismay of humanity, the Taliban destroyed the heritage monument by constant dynamite detonation over the course of several days. Where the statue once stood, remains just an empty hole. The international community is sternly consistent in their strong disapproval of their arguments for this action.

Society in Afghanistan has changed in the last 18 years, despite the uphill battles. In terms of media, there are more than 75 television channels and internet portals in the private sector, as well as over 160 radio station. The world renowned TOLO News is a private entity. Civil society has transformed, with think tanks, advocacy groups, and the like.

More than societally, politically, Afghanistan has also come a long, long way in a short period of time, most especially in the backdrop of turbulent political conflict, when examined. Albeit imperfect, since 2002, Afghanistan has undergone 4 complete rounds of general elections and parliamentary elections.

This whole time, several economic projects are undergoing realization, including the Turkmenistan-Afghanistan-Pakistan-India Pipeline, or ‘TAPI Pipeline’, estimated to begin operationality in 2022. Note: the TAPI Pipeline would pass from Afghanistan into Pakistan in the southern border area by Kandahar.

There is also the Central Asia-South Asia power project, or ‘CASA-1000’, which saw a breakthrough in negotiations in 2016, and is estimated completion in 2020. It entails exporting electricity generated by hydropower facilities in Kyrgyzstan and Tajikistan to Afghanistan and Pakistan, where Afghanistan serves also as a transit country, benefiting from the transit costs. About 1300 megawatts would pass through, 300 of them would be used in Afghanistan, and the remainder transited.

Further attesting to Afghanistan’s geo-strategic importance and potential as a transit hub is the project titled ‘Lapis Lazuli corridor’, inaugurated in 2018. It is an infrastructure transit from Afghanistan to Turkmenistan, across the Caspian Sea into Azerbaijan, to Georgia, and finally, to Turkey. Moreover, it is not part of the One Belt One Road, it is an initiative of the Ministry of Foreign Affairs of the Islamic Republic of Afghanistan. Operationality has been demonstrated by delivering goods by road where applicable, and it is planned so that it will be later reinforced by railway construction. 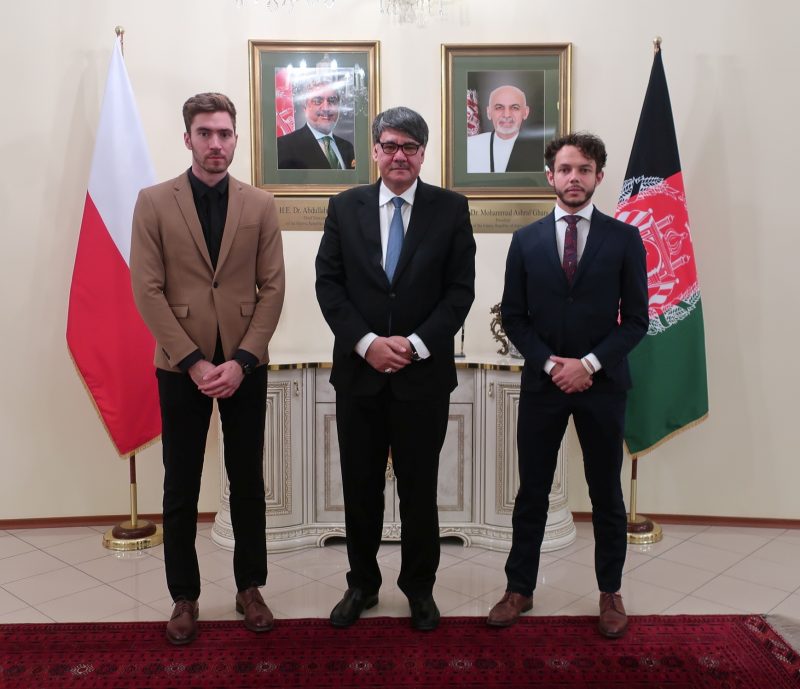 Afghanistan is intent, as most countries which are in need to do so, diversifying its import and export compositions, and to not be dependent on a single country, in this case, Pakistan. As Afghanistan is a landlocked country, before its sea exports were dependent on the port in Karachi, however, an additional route has been recently opened; it goes from China into Tajikistan and then Uzbekistan via cargo train, and then into northern Afghanistan, namely Mazar-e Sharif. Another route, inaugurated in 2017, is that pertaining to Chabahar port, Iran, with a paramount role played by Japan, it connects Afghanistan to the ocean with cooperation also from Iran. In fact, Afghanistan has already owns two cargo ships. Furthermore, Afghanistan acts as an air corridor for exports and imports, which has been demonstrated aptly by Afghanistan’s steady increase in zafran production.

In Herat province, the Salma Dam, or as is referred to nowadays the Afghan-India Friendship Dam, is a hydroelectric dam which has increased its electricity output to 80 megawatts as well as over 70,000 hectares of irrigation supply. Other dams are currently under construction. It naturally illustrates that Afghanistan is a remarkably rich source of water, namely freshwater from its mountainous terrain. Its rivers carry water into Pakistan, Iran as well as Tajikistan. In the coming difficulties with water shortages around the world, and the geopolitics of water becoming an uncomfortably more conspicuous element of a country’s calculus, Afghanistan will have to play an incredibly savvy role in the region.

Additionally, there are over 400 kinds of mineral resources in Afghanistan, including iron, coal, copper, as well as precious and semi-precious stones, and gold and lithium. All the aforementioned factors suggest that Afghanistan is becoming steadily more ready to provide ample investment opportunities for increasing FDI. Poland is not yet a substantial investor in Afghanistan’s sectors, but there are good reasons to begin slowly reconsidering such options. Notably, solar energy sector is developing well in Kandahar, Bamyan and Herat provinces. Just 30km from Bamyan lays the first Afghan national park, Band-e Amir.

At the end of the day, it is not without difficulties, but Afghanistan has a vast array of more aspects and positive developments to its country than is seen at first glance of headlines which mention it. Thanks to the conversation with the Ambassador, WIR was able to get a better sense of this, and share it with its readers.

Agenda 2030: Global Can Mean Local – Why Are Cities Key to the Implementation of the Sustainable Development Goals of the United Nations?

Russia vs. NATO’s Eastern Flank: Not Only Military Threat

The recording “Combating violence based on religion or belief”